Your options for charging in an ongoing combat are often more flexible than you think, especially when your unit has Nimble. Back in 1st edition, when everything had two pivots on the charge, these were commonly referred to as “Nick charges” after I became the de-facto master of them. I’m much happier with the term “Corkscrewing” though!

Essentially when you pull off a corkscrew, your unit charges out of combat with the unit immediately in front of it and into an alternative target.

Consider the situation below. 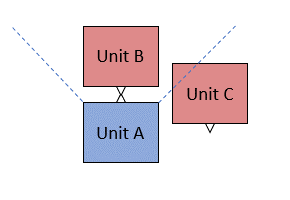 Your unit, Unit A, is engaged with Unit B. Unit C has moved down your flank. Your first instinct might be to charge back into the combat unit Unit B. 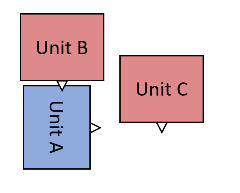 Remember that when charging, you are allowed to approach within 1” of enemy units, so you can pivot on the spot, as long as it’s during a charge, and end the pivot within 1” of the enemy. You can’t overlap the enemy unit after pivoting so there are some restrictions on the unit base size for pulling this off, explained towards the end of this article.

You can even force this situation. Instead of having your units perfectly lined up with each other, try staggering them:

By setting Unit D slightly back from Unit A, when the enemy unit bounces off D, they will be set up for a corkscrew flank charge from Unit A.

Note that you need to make sure that the enemy units can’t double-charge Unit A. This is easiest to do by butting it up against blocking terrain so there’s not enough room for both units to fit.

On the flipside if you’re playing against an opponent who staggers their line, don’t fall for the trap! This goes back to my previous article on when to charge. Always think about where your unit will end up after a charge. If it will be stuck in a corkscrew vulnerable position, don’t take that charge. Wait. Do something else instead. Just don’t put yourself in this situation.

You can also inadvertently set your opponent up for a corkscrew charge, particularly when regrouping from combat. Imagine that the two battle lines are lined up, not staggered: 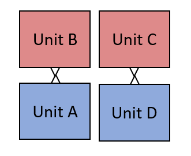 In this situation, you have charged Unit A into Unit B and Unit D into Unit C. You resolve A vs B first, and rout Unit B. If you choose the D6” advance with Unit A for its regroup, and unit C is not routed by unit D, then C will be able to corkscrew you: 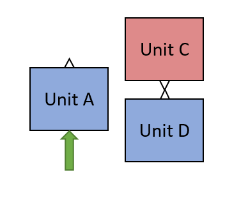 Always think about where your unit will end up after the regroup. This isn’t a regroup that I would take even if I’m fairly certain that Unit C will be routed because there’s still the risk of the double 1. If it’s absolutely essential that Unit A advances, I would do the D vs C combat first so I know whether it’s safe to do so or not.

Sometimes, the enemy unit doesn’t have to be on your flank for you to corkscrew into them. 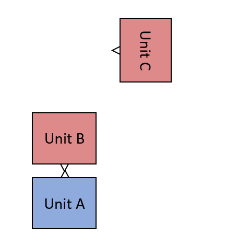 Let’s assume that either Unit A or Unit C are taller than Unit B, therefore A can see C. If Unit A is Nimble, it can do a charge like so:

Remember the rest of the charging rules apply; you must be within charge range of the target, it must be in your front arc and you must contact and align with the facing that you started the order in.

Defending against the Nimble corkscrew

Be aware of it. Don’t just write Nimble units off as locked in combat. They can snake their way out of it if you leave a charge target exposed.

Block their line of sight. They still have to see the target. Units like Varangur Fallen are quite bad at pulling this off, since their height of 1 means that they can’t see over the top of basic infantry.

Block the facing. If they begin in your front facing but can’t make contact with the front facing (or a corner of it), then they can’t charge. If C was a bit further forward behind B so that the final forward movement would go straight past C, then C is not a valid charge target. Equally if they’re in your front arc but can only make contact with your flank on that forwards move then they can’t pull off the charge.

Don’t expose a flank. If there’s no way to stop a Nimble corkscrew then don’t let them hit your flank.

Before you or your opponent try a corkscrew, ensure that the base size will allow it. As a general rule of thumb, Infantry and Cavalry Regiments will be able to do it, along with Large Infantry and Large Cavalry Hordes unless any of them have a non-standard base size.

One thought on “KoW Tactics: The Corkscrew”