Threat Projection is one of those tactics often overlooked. Put simply, threat projection is using the threat of an attack by one or more of your units to force your opponent to react to you.

That’s not to say that you will attack. Just that you could potentially attack and therefore your opponent has to react.

A good example is something that I covered in a previous article – the Nimble Dance. You position a Nimble unit so that it is able to charge the flank or rear of an enemy unit. The enemy reacts by turning to face you, so you no longer have that much-craved flank or rear charge. You’ve successfully projected your threat in order to force your opponent to react to you, scuppering their original plans. At this point you can either charge the front of the enemy unit, or you could use your Nimble movement to dodge out of their front arc in order to force them to react yet again.

This is a good example of threat projection: 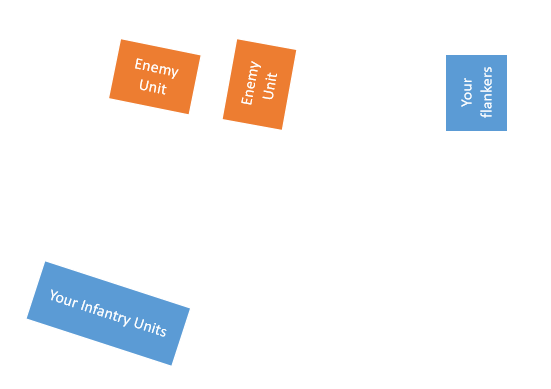 You were facing down multiple enemy units which, combined, you would not be able to take out. However, by moving a unit up on the flank, they have to turn one of their units to face you to prevent that flank charge. Your main infantry units can now attack the enemy and gang up on it, attacking them one at a time and achieving an overwhelming victory.

The flankers? They don’t have to charge. They might not be able to take on the enemy unit that turned to face you. They can happily just sit there, continuing to project that threat and ensuring that the enemy doesn’t turn their unit back to face your infantry.

Any time that you can make the enemy protect themselves against you, rather than carrying on with their original battle plan is something that’s in your favour.

A major example of this is versus shooting units with Reload.

In this situation, the horde will probably turn to face your flankers because of the threat. Great. The horde can’t shoot for that turn. Next turn? You don’t have to charge. Just move out of the Hordes firing arc if you can and threaten their flank again – and they’ll be forced to turn to you yet again.

Even if you can’t get out of arc, it can be worth sacrificing your flanking unit by exposing it to a volley, or two, of enemy fire since it ties that enemy unit up for multiple turns (and you can swing the odds of 2+ volleys in your favour by moving into cover):
Turn 1: Turn to face flanking unit (can’t shoot)
Turn 2: Fire a volley at flanking unit
Turn 3: Turn back to face the rest of your advancing army (can’t shoot)

If it takes two or more volleys from the horde to take out your flankers then your infantry based army will be on top of them before they get a chance to turn back towards you. An 80 point unit of Gargoyles or 100 point unit of light cavalry will be able to tie up an entire Horde for most of the game this way.

It all ties back to the “You don’t have to charge if you don’t want to” mindset. Moving units out of arcs means that the enemy has to keep responding to you.

Those enemy shamblers are very likely to be surged into your flank next turn (move forward, pivot to face your flank, surged in). You’d like to prevent that. Well remember that Surge Casters need Line of Sight to the shamblers, and they are generally very weak units. Figure out where they’ll have to move their surge caster to in order to cast surge. Threaten that area with another unit.

You can safely say that the light blue areas here are already covered – the one in front of your unit because that unit can already charge any unit sat there (if the Shamblers fail to break you in the flank), and the one to the right because Line of Sight is blocked to the Shamblers (assuming heights block it anyway).

Figure out which spot your opponent will move their surge caster to, and threaten that area with another unit. They won’t move their caster there. Remember to pre-measure everything – their caster may only be able to Advance to that triangle to the upper-right of your unit, with everything else needing an At The Double move. If you can make sure that if they move to that upper right triangle then you’ll charge them in your next turn, then they’re not going to move there. 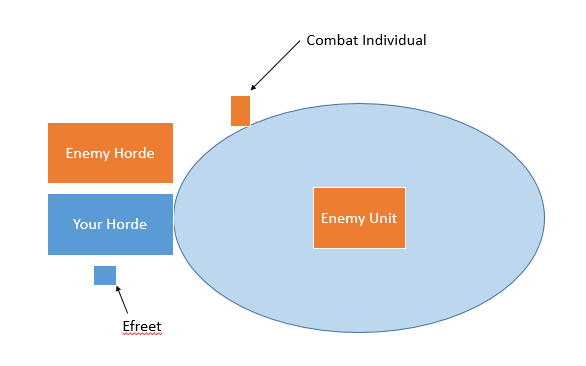 The light blue circle represents the 12” bubble around the right hand enemy unit that I would need to move my Efreet within in order to shoot at that right hand enemy unit. At the moment by Efreet is safely tucked behind my (blue) horde, protecting it from being charged. My opponent obviously doesn’t want me to shoot at their unit on my right flank. They’ve moved a combat individual up so that if I try and move within that 12” bubble, they will be able to charge my Efreet.

I will not move my Efreet there. My Efreet is stuck there doing nothing. My opponent successfully used threat projection to nullify my Efreet and stop it shooting. 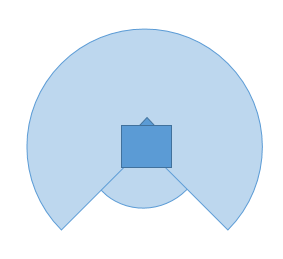 The reason that this is important is to know that your opponent is probably not going to move any weak characters within this threat range, unless they know they can disorder the Boomers. Any wizards, army standard bearers etc are going to stay out of this threat area since they can be picked off by the Boomers. Like in other situations, while forcing your opponent to react in this way might not net you a direct kill, you can screw up their battle plans and force them to react to you rather than carry on with their original plan.

I had a similar situation in a game a few months back. I had two hordes of Ogre Shooters on one flank (conveniently where most of the objectives were). My opponent would not move within 36” of them. They believed the hype on the internet about Ogre Shooters and gave them a huge berth. This meant that I controlled one entire half of the battlefield where they just would not enter. While my shooters didn’t get any kills that game, it did mean that I was able to control the objectives on that half of the board without any trouble.

It wasn’t deliberate threat projection on my part, but my opponent read it as projection and as soon as I realised why he was giving me half of the board, I began moving my shooters towards him and forcing him back even more.

Threat projection is one of those tactics that’s a little difficult to explain because a sometimes people do it subconsciously anyway and it’s extremely situational. Once you start looking to project your threats however and seeing the game as being just as much about messing with the enemies plans as actually killing them, you’ll find that you can really start to control the board. When you control the board, you will win the game.