I don’t know if I’ve mentioned this recently, but I’m quite a big fan of Orks. I know that will come as a shock to some people.

I love the story of Da Green Krusade and sadly this seems to be something that’s getting lost to the mists of time. People who weren’t around for it perhaps see the little fluff snippets that crop up from time to time referring to Da Green Krusade (or Kr00sade) and not realise that this came about because of the Ork community.

Movie trailer voice: In a world…

Let me set the scene.

The year is 2003. 3rd edition of 40k has been available for 5 years and 4th edition (IMO the best edition) is a little over a year away. Games Workshop announced that they will be running a massive summer campaign called “Eye of Terror”, charting Abaddon The Despoiler’s 13th Black Crusade’s attempts to break through the Cadian Gate and out of the Eye of Terror.

This would be a massive undertaking, far bigger than any previous summer campaign, and GW said that the results would have real implications on the 40k universe. A book was published, Codex: Eye of Terror, detailing the background of the campaign as well as several new army lists for use in the campaign.

This was a massively publicised worldwide event and was accompanied by mega battles and campaigns with Games Workshop stores.

… not too different to our own…

Orks were in a pretty poor spot.

They had received a fairly substantial update to their model range along with their 3rd edition codex in 1999. This introduced the Brian Nelson Ork boyz that we all know and love. They also received top billing in a previous summer campaign, Armageddon, as well as a sub-list for the Kult of Speed in Codex: Armageddon, though unless I’m mistaken they didn’t receive any new models during that release.

The 3rd edition codex is often considered the worst one. It followed the trend of the initial 3rd edition codex’s of being almost pamphlet sized, weighing in at just 48 pages long, and was extremely light on fluff. There were less than half a dozen pages in the codex dedicated to fluff and what fluff there was had subtleties that many in the community missed, leading to the myth that “Ork stuff only works coz they think it does“.

Rules wise, Orks were in a fairly bad spot. They were underpowered compared to other armies and many of their units were considered so weak as to be unusable.

This was nothing compared to how bad things would get for Orks since it would be another 5 years before they got a new Codex and any substantial model update (a few metal characters were released here and there in the “wilderness” years).

They were a niche army to say the least. The 40k community in general liked the idea of Orks, but the lack of a decent codex, model range and balanced rules made Ork players rare.

This was a very similar situation to Orks at the moment, with a badly outdated set of rules and a model line with large sections in dire need of an update. Of course, we now have Orktober confirmed so light at the end of the tunnel, but there was no such light for Ork players back in 2003.

… one race would find themselves outcast…

The Eye of Terror campaign starred the Imperium and Chaos squaring off against each other. Naturally other factions would be pushed to the side a bit to make room for the protagonists.

There are ways of giving secondary factions attention in any campaign though. The Tau were given the objective for creating the 3rd sphere expansion. While Tau weren’t prominently featured in the main fight, they still had a great bit of background fluff to fight for. Other races without their own purpose would be allied to one of the two main factions in the campaign so would be fighting for their overall causes.

Except Orks (and Tyranids, but this story isn’t about them…).

These were their objectives according to Codex Eye Of Terror:

(Note that the fluff about the Tau’s 3rd sphere expansion was examined elsewhere, Orks had no such fluff.)

They could fight for either side. It didn’t really matter. They had no reason to fight other than “to fight” (which admittedly is often a good excuse for Orks to have a fight…)

The message this sent could not be clearer: Games Workshop did not care about Orks in this campaign.

Ork players were a bit miffed.

… yet find company in themselves…

I mean this is the internet, so it was complete anarchy. While Chaos gradually pushed the Imperium back, most of the campaign was simple tit-for-tat stalemates as you’d expect. As soon as one side started making ground, the other would wipe that out with their own victories. Except…

It seems a strange kind of irony that the faction that mostly descended into anarchy in the fluff was actually the most organised in the campaign.

I wish I could find the original post that started it all, or even credit who it was who started it. Somewhere, in the depths of some message board (I think on The-Waaagh, but my search-fu didn’t find it) is a message along the lines of (very roughly paraphrased and from years old memories):

Players soon settled on the Scarus sector (soon to be referred to as Skar-Uz). It was remote and relatively unimportant so wouldn’t get much attention from other players. Orks stood a better chance of making a difference there than anywhere else.

As soon as the official message boards went live, the Ork community when on a recruiting spree. Message after message asking all Ork players to converge on a third party forum in order to co-ordinate their results.

… work together to form…

Orks were by far the most co-ordinated race of the campaign. The message boards would organise strategy and the community would collectively choose single targets to attack.

Planets had a “Control” percentage. Each victory for the Imperium on that planet would increase the control stat, while each victory for Chaos would reduce it. Most planets in the campaign had fairly small swings, perhaps going from 60% control down to 50%.

The anarchy present in the other factions, as well as their focus on more important sectors meant that there was little organised defence against the Ork onslaught. The relentless assault by Ork players on specific targets was unprecedented.

Before long, this unstoppable force gathered a name.

The end of the campaign saw most of the planets in the Skar-Uz system firmly in the hands of Orks. The community had even begun collectively renaming the planets. Most notably, they renamed the capital Mordax prime to something much more Orky – Moredakka Prime.

Imbrium, Lethe Eleven and Mordax Prime had comprehensively been subjugated, and the defences on planets Gudrun, Ulant and Nysa Stromolo were collapsing from the unrelenting assault by the time the Eye of Terror campaign wrapped up.

The Eye of Terror campaign resulted in a major Chaos victory. In fluff terms, this should have been a catastrophe for the Imperium and carry major ramifications for the 40k universe. Unfortunately it seems that GW got a bit scared at such a major shakeup.

Rumours had it that behind the scenes some studio members such as Andy Chambers wanted the results to stand. They wanted to carry on with this shake-up to the 40k universe and deal with all of the ramifications. The universe would probably look very much like 40k does now with the Dark Imperium, but it would have happened in 3rd edition rather than 8th.

Unfortunately (or fortunately depending on how you look at it) the other side won out. Very little of the background changed. A few characters were killed (most notably Eldrad Ulthran of the Eldar), but the result was effectively shrugged off. As the years went on, fluff diminished the result even further, even going so far as to resurrect Eldrad with no explanation.

GW would vastly reduce the scope of future campaigns, presumably so that any future unexpected wins wouldn’t jeopardise the status quo of the entire setting.

Only one ramification from the Eye of Terror stayed.

The Ork communities major and unexpected victories at Skar-Uz were described officially in the closing results published by Games Workshop. It even noted the rechristening of Mordax to Moredakka. This campaign turns up again and again in official fluff and is a prime example of why I love the Ork community so much. 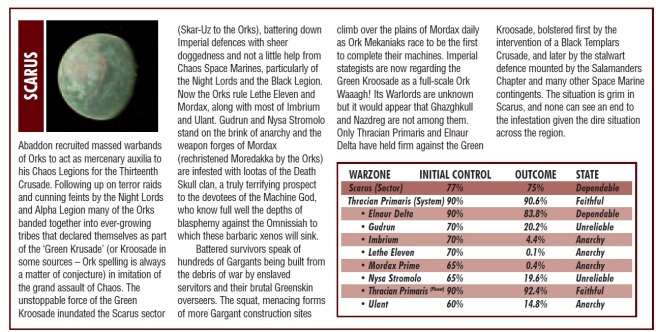 I feel that this piece of Orky history is being slowly forgotten, so I wanted to do my part in keeping it alive and well. I’ve spoken to a few relatively new Ork players over the years and found that many of them are aware of the Green Krusade fluff snippets, but none of them were aware that these are purely in official fluff because of Ork players.

Many of the original posts and websites have been lost, deleted or just buried so heavily in decades old forums as to be near impossible to find. My blog won’t be around forever and it’s hardly a major resource on 40k that’s frequented by thousands of players, but by reposting this information perhaps I can help keep it alive for just that little bit longer.