I don’t think that the formula used in the UK Rankings Site works as well as it could. Having spoken to a few others, I think this view is shared quite widely, so I’d like to propose that we tweak how the formula works.

The biggest issue with the rankings as a whole is that it’s formula is heavily weighted towards two day events, which are few and far between with Kings of War. That is what it was intended for, being derived from a WHFB rankings formula where two day events were the norm and one day events were seen as minor practice events. KoW events in the UK however are overwhelmingly one day affairs.

The weighting of the formula means that someone can attend a couple of two day events, get an average-ish score and be placed well above someone who consistently gets top placings at one day events. While two day events should be rewarded more than one day events, the points awarded seem over the top.

While the rankings are there to help encourage people go to tournaments, unfortunately the formula at the moment can dishearten people. If you can’t go to two day events at all then you’ve basically got no way of getting a decent ranking score. If you miss even one of the two day events then you’ve got a real uphill struggle.

Simon Clifford came 8th at South West Clash 2, which was a 2 day event with 28 players. Matt James came first at Tides of War 9, a one day event with 20 players. Simon got more ranking points.

Yes, there were 8 more players at SW Clash 2. Yes, it was a 2 day event. Can you honestly tell me that despite that, Matt should have received fewer points than someone who came 8th?

Technically there’s just one modifier in the rankings formula which differentiates between one day and two day events – number of rounds. If a tournament has four rounds instead of five (i.e. a one day event vs two), then the points earned are reduced by 20%. That in itself is quite a big hit to the points, but that’s not the only thing.

I’ve tweaked the rankings formula and come up with something that I feel is a better representation of how the KoW Community runs its events. I’ll go through the exact formula below if you’re interested in the sheer calculation side of it but to summarise; I’ve simply reduced the effect that a 2 day event and the number of players has on a player’s rankings score.

In the table below, I’ve calculated what the top 10 players would achieve at 3 event archetypes: 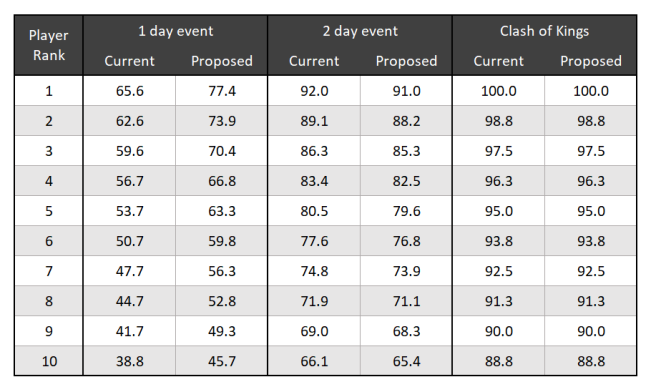 Looking closer and you can see that under the current formula, all of the players in the top 10 for the two day event score more than the person who wins the one day event. That feels very wrong.

Under the proposed formula, the top 5 players at the two day event will score more than the winner of the one day event, but the sixth will score less. This feels a lot better.

Skip to “When to Implement” if you don’t care about the technical explanation.

I’ve created an Excel template which allows someone to edit the various parts of the rankings formula and see how that would affect results. You can download a copy here.

The first part of the rankings formula works out a maximum available score based on the number of players attending. The formula is:

The number of players has a minimum of 10 and is capped at 40. Effectively this means that an event will have a maximum score of between 70 and 100 ranking points.

The changed formula is:

The next part of the formula applies a modifier based on the number of rounds at the event:

The Changes In Tandem

I’ve written this article to explain the changes in detail to the community, looking for feedback. I’m definitely open to amendments to this formula (a couple of notes on some of those below) and I’m seeking approval from the community to push through with these changes. I’ve proposed them in a private TO group and have received good feedback, now I’d like to make sure that the community is happy.

If the community is happy, I would look to implement these changes at the start of the new season after Clash of Kings 2018. We shouldn’t change them mid-season in my opinion.

At the moment there is no modifier based on the size of the event. This is normally fine, however smaller events can skew the formula. You can, for example, run a five round 1200 point tournament very easily within a single day. Even though it’s a one-day event, the formula would give it full points rather than 90% points because it has five rounds. I would suggest having a cut-off based on the point level of an event. Any event under 1500 points has a 90% modifier applied on top of the round modifier (this essentially brings the round modifier down from 100% back to 90%).

At the moment the formula doesn’t differentiate between 5 round and 6 round tournaments. Personally I’m in favour of this, though I fully accept that it’s largely my personal feelings and preference for the 3 games + 2 games two day format, rather than 4+2 or 3+3. I go to two day events for the social aspect more than the gaming aspect and I find 4 games in one day to be very tiring and have a negative impact on the social aspect of an event. I would rather play a 5 game two day event than have a TO decide to make their event a 6 game affair purely for the ranking points.

If there were to be a 6+ round modifier instead of just 5+, we would need to revisit the player cap because I feel this would unfairly skew results from the Clash of Kings tournament.