No one is sure why the Ork known as Orrik Da Red has gone Waaagh-about. Orks are not known for their wandering nature after all… There are many theories, ranging from, “ees’ bin kicked outta da warband fer bein’ a no good zoggin git” to, “ees’ a no good spyin’ git wot can’t mind iz own business”. But the fact remains that Orrik da Red has shown up on many different battlefields, seemingly at random, and has then wandered off again without so much as a “zog off ya gitz, I’z outta ‘ere”

Orrik tends to appear in a warzone just before a particularily good fight. He is accompanied by his trusty grot, (well at least as far as anyone can trust a grot). He records everything he can before legging it out of there and off to the next system. It remains unclear as to why he collects information. It’s value is dubious at best. Perhaps he’s on a mission from Gork. Perhaps he is a no-good-spyin-git and has yet to report back to his boss. Perhaps he’s just a Madboy with a partikular form of dimentia.

A great catastrophe occurred when the Warseer forums crashed a few years ago. Not Warseer itself – the internet would have been improved if the forums had stayed crashed. Sadly, there were other forums hosted on the same server that suffered too. Most notably, The Waaagh.

In what I call “The Wilderness Years”, the period between 3rd edition and the end of 4th edition where there were zero Ork releases or updates, The Waaagh was the place to be for the budding Ork enthusiast. These were the days, oh so long ago, before Facebook had discussion groups and where online chat took place on message boards.

The Waaagh was an incredible resource, with enthusiastic modellers and painters sharing their creations and gamers trying desperately to find some semblance of competitiveness from our woefully out of date codex.

When Warseer crashed, so did The Waaagh. Not only did this mean a large number of regulars move to other Ork message boards, such as the groups on Facebook, but very sadly all of the photos were lost too.

A lot of amazingly creative conversions and builds were instantly lost to the mists of time. I want to do my part in preserving some of them just that little bit longer. One of the ones that I want to tell you about is very special. He is…

I wish I had more photos of Orrik but sadly I don’t. I trawled every Orrik thread I could find and all the photos had been deleted, except for two. 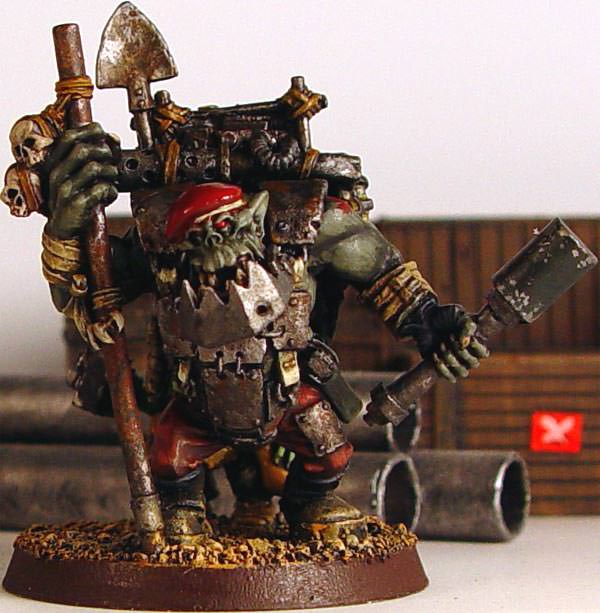 What made Orrik so special?

He belonged to the community.

It all started in September 2003 (my god, even I’m shocked at how long ago it was) when a member called Tonzateef posted a thread titled “The Foreign Ork Exchange Program”. He was posting some bits to another forum member on a different continent and decided to send an “escort” mob of boyz with it. He liked the idea of seeing his models in another country.

Soon the thread began discussing the possibility of making a community nomad model who would be sent from member to member and used all over the country (and potentially the world). People would get photos of it with local landmarks, would use him in their games for a few weeks etc.

There was talk of making it a vehicle of some sort, however that was very quickly nixed when someone (rightly) pointed out that a vehicle was likely to get pinched by one of the recipients. Instead the group settled on the idea of a fairly innocuous model and Orrik was born.

One of the problems with this being so old is that it’s difficult to track down exactly where he traveled. He started in London, Ontario, Canada and definitely made it to the USA (confirmed sighting in Boston, Massachusetts) but how far he got exactly is difficult to ascertain. This was the sign-up list from his travel agent:

From time to time, Orrik needed a bit of repair work. Understandable given that he was a metal miniature being sent through the post.

Even if he didn’t need repair work, members were encouraged to add their personal touch to Orrik when they received him. There were some excellent conversions done and paint improvements made. You can see this in the two surviving pictures of Orrik, where in one picture he had been given his red beret. Other members made similar modifications to Orrik, such as trophies from his various battles and even a bionic leg at one point.

This is why it’s really sad that there’s a lack of surviving pictures. It would be great to show Orrik’s evolution, with the model going through progressive changes.

Orrik also had a passport. A small book where members were encouraged to write up his travels and share mementos. As far as I know, there weren’t any photos of this posted.

The Mists of Time

Orrik traveled for over a year, maybe two years, with members posting up threads of his adventures and their modifications. He did seem to get stuck at one point, spending nearly five months in one person’s possession while it was generally agreed that 2-4 weeks with each member was more than sufficient (the five month stretch caused a bit of bickering as you can imagine) with the last confirmed sighting in January 2005.

During that time he traveled across Canada and the USA. I know that he didn’t make it out of America (at least “officially”) but ultimately he went missing.

No-one appears to know for sure whether he went missing in the post or if some sneaky zogger decided to keep him. It’s sadly more likely to be the latter but the whole process was quite disorganised so it’s difficult to figure out who had him at the end.

There was a brief attempt to revive the idea with a replacement Orrik, but it never really took off like before.

If anyone knows more than this or has any more photos then I would love to collect them. Please get in touch with me.

Orrik was a really good example of how close knit the online Ork community was “back in the day” and why I love The Waaagh forums.