I mostly love the Mantic Archfiend model. However, there are three issues that annoy me – the static pose, only one pose and that chainmail nappy. In my original army, I fixed the nappy with some poorly sculpted fur. As I started to build my Lonewolf army with two (yes – two!) Archfiends in the list, I decided to fix all three this time.

This is how I reposed my Archfiends.

These are the bits straight out of the box and after cleaning up.

The biggest repose is in the right hand leg. Repose that and you’re 90% there! I used hot water to bend the resin. I had two mugs on my desk, one of hot water (just boiled) for softening the resin and one of cold water for setting it. I used pliers to hold the relevant pieces in the water for around 30 seconds to a minute to get them ready for bending.

The main piece like I said is the right hand leg. It needs bending at the ankle ever so slightly – you’d be surprised how little you need to bend it to get the Archfiend into a running pose!

Just this tiny tweak already puts the Archfiend into a much more dynamic charging/running pose: 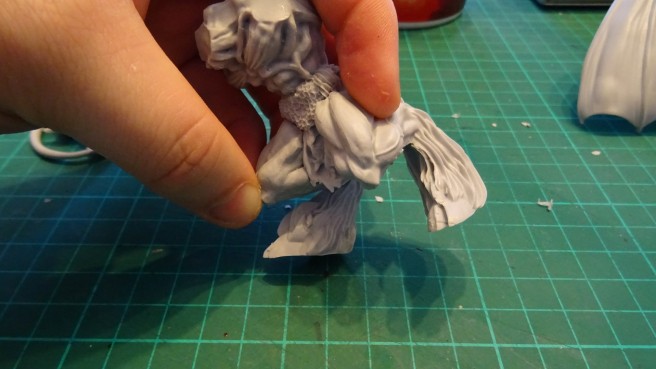 Next we come to the arms. I want the left arm to be swinging forward as if the Archfiend is running full pelt at the enemy. The default pose has the arm held quite far back. This means bending it at the elbow by quite a long way. 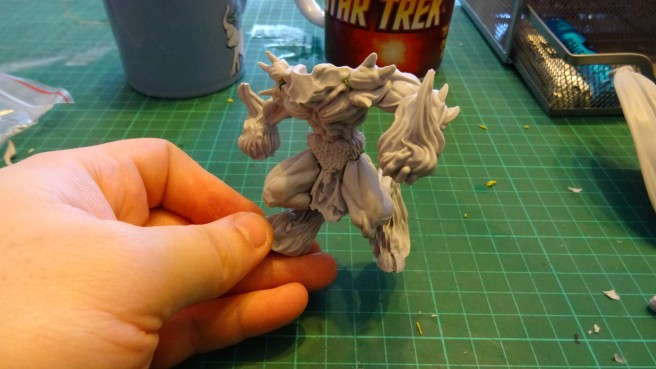 However, looking straight on like that doesn’t really look quite right. So it’s time for the really scary part…

…cutting the body in half with a saw so that the upper body can be twisted slightly.

There’s quite a bit of the nappy left over on the upper body from this cut so I just go around with a knife and cut the excess off:

If we’re twisting the upper body to the side, unfortunately that means that the head is still going to be unnaturally facing straight forwards. That calls for a bit of a trim of both the neck and the back of the horns on the head.

This means that the head can now face forwards, even with the body twisted slightly away (though it will need some greenstuff to fill the gap).

There’s still a ton of greenstuff work to do, most notably something to cover up the nappy and waist connection (I’ll be doing a whole bunch of pubic hair like on my wingless archfiend) but the pose itself is now done. I used the exact same techniques on my wingless running archfiend but posed the upper body the opposite way with the right arm forwards rather than the left. The techniques however are exactly the same.