Terrain can seem a bit double edged at times. The better it looks, generally, the worse it is to play a game on. A fully modelled forest, full of trees, bushes, logs and all other details that bring it to life might be visually stunning, but it’s impossible to play a game on. Even with skirmish based games, you’re limited by where you can place your models, and you can completely forget trying to play something like Kings of War on it. The perfect terrain from a gameplay perspective is a flat, 2D base with “Forest” written on it but that is as visually unappealing as you can possibly get.

Obviously, there’s a huge gulf between the two extremes and it’s up to each individual terrain maker where the line between playability and visual appeal is. One thing I’ve had a few comments on is how well I’m able to straddle that line and make terrain designed for gameplay while sacrificing as little as possible in the visuals department.

So here are a few techniques I use.

The key to making playable terrain is keeping things as flat as possible. Flat surfaces are great for gameplay. Anything rough and uneven is not.

Let’s take ponds and swamps. Keeping them flat, about 6mm high at their peak, means that they’re still great for playability.

If these were filled with fixed rocks and rotting tree stumps then they’d be a nightmare to play on, since your units or characters would have to balance precariously on top. By keeping things flat, even if it means sacrificing some of the visuals, it keeps them suitable for playing on.

This is the most common one and useful for decorative difficult terrain, such as forests. You simply make a base with all the decoration you want to cram on, then cut out a slightly larger base that you simply texture with fine sand. When setting up the board, you place the base topper on top of the larger base. The larger base is the outline of the terrain-game. When a unit or model wants to enter the terrain, you just put the base topper to the side until the unit leaves. The flat 2D base remains in place to show the outline of the terrain.

I used this technique on my latest terrain set. For example, I made some patches of difficult terrain that are a sea of boulders (Height 1 in Kings of War). Now these would be a nightmare to try and play on, if they didn’t each have a corresponding 2D base:

I also used the same technique for the forests in the same set:

In this case I only made a single decorative topper for each flat base and the whole thing gets removed when a unit enters. What you can do instead is make several separate toppers, so each base has 2-3 toppers instead of one. When a unit enters terrain, you might not need to pick up all of the toppers. Leaving one or two of them in place helps with the visual side of things. This unfortunately is not great for games that use TLOS, since any removable elements need to be placed back in the exact same spot.

In some cases you may want to have just specific elements be removable. In my “Advanced Swamps” video, I show how you can use some laser cut MDF bases and outlines to make some tree stumps removable. Like the removal toppers, if a unit needs to move onto one of these stumps then they can just be removed so the units can stand on top of a flat base.

If your terrain is blocking and units aren’t allowed to enter it, then go crazy! As long as the outline is clearly marked, you’ve no need to worry about putting figures there. 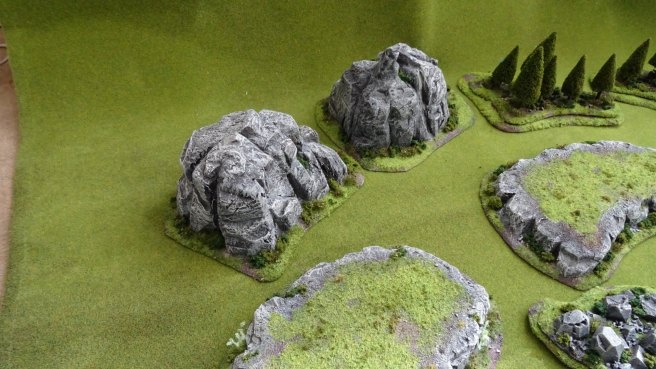 There are tons of arguments in the stepped vs tapered hills discussion. Flat, stepped hills are the more traditional wargaming hill, with flat tops for placing figures. This does mean that models or units that are half on the edge of the hill have to be propped up somehow so they can stand on top.

Tapered hills however have a smooth, much more realistic looking slope. They flat out look better. Unfortunately, they have the drawback that anything more than a very shallow gradient will cause top heavy models to fall off, or models to slide all the way to the bottom. They also have to be much larger in order to have a decent slope. In my experience, these drawbacks are worse for gaming than stepped hills.

I try and find a middle ground with stepped hills by making their sides rocky. This makes them look like a raised outcrop of rock rather than a very unnatural flat raised area with dirt/grass sides. It doesn’t look perfect but it is playable and cuts that fine line between playability and visuals! 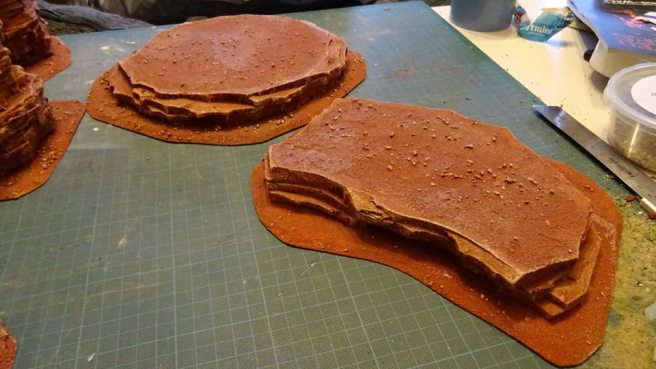 Terrain doesn’t have to be flat nor unplayable

I’ve only presented the techniques that I personally use to make my terrain as playable as possible. It’s up to each games designer as to how important the different elements of gameplay and visuals are. Some may want the terrain to look absolutely top notch and are willing to sacrifice gameplay for it, while for others gameplay is the primary consideration. What I hope I’ve demonstrated is that you don’t need to go to the extent of just having flat 2D cardboard cutouts if you want terrain that is good to play on.