A question that crops up every now and again is “Why can’t a single unit, such as a horde, charge multiple enemy units in the same turn? It would be simple just to split the attacks between two targets.”

This is one of those things that sounds simple when you say it like that, but when you get down into the nitty gritty of actually writing the rules and covering exceptions, you start to run into serious issues.

I’m going to term this sort of charge a Split Charge. Multicharge would be a more descriptive word for it, but obviously, it’s already in use.

So let’s look at the ideal situation where this rule would work without issue:

The enemy horde declares a multicharge against the two regiments directly in front of it. It moves forwards into contact and splits its frontage between the two. The attacks are then split between the two units.

No problem right? It would be so simple to do this right?

Now let’s look at a less than perfect situation. 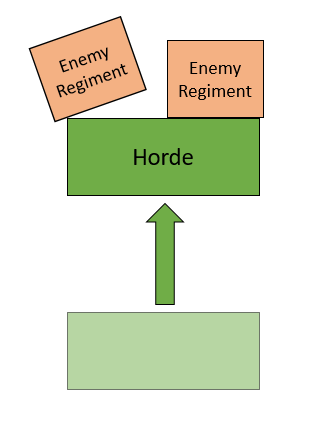 Oh. Now what? The horde can’t align to both enemy units because one of them is at an angle. The simplest way of resolving this is to say that it can’t charge if the units aren’t aligned with each other, but then all the opposing player has to do is offset the angle of their units by 0.1° and the horde can’t do a split charge. The entire rule is made pretty much useless because any player will simply make sure their units are ever so slightly tilted and their opponent can’t split charge.

Right, so the other solution is allowing the target unit to align to the horde. First off this seems wrong because there’s no other precedent (asides from an extremely obscure situation in the FAQ that no-one has successfully demonstrated using in real life) for the target of a charge aligning to the charging unit. It seems to break one of the unwritten design rules of Kings of War.

Ok, so we allow the target to align to the charging unit. It kinda feels a bit hokey, a bit breaking unwritten rules but whatever. We want to allow split charges. 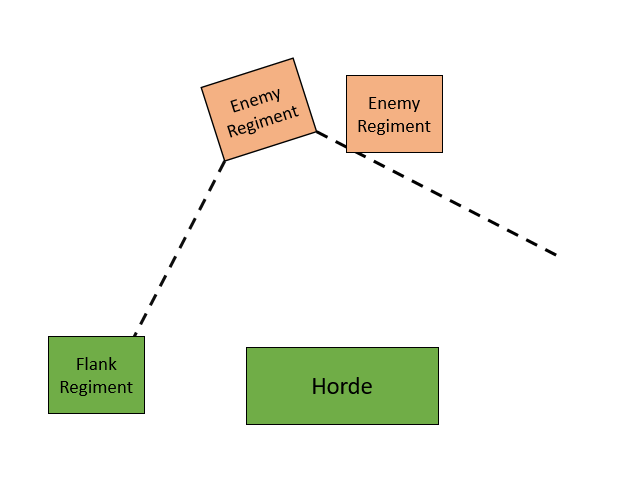 Man, this is getting all quite complicated isn’t it? What started out as a simple rule is now having to have a lot more explanation than “split your attacks between two enemy units.” We’ve not even started on Multi-split-charges, about sharing space, about deciding which enemy units will align to the charger and which ones the charger aligns to. Nothing yet about split charges against three or more enemy units (because someone will undoubtedly ask why they’re restricted to just two units) or any number of other situations. All of these situations are ones that I’m just thinking of off the top of my head – I’m sure that when it comes down to testing that there will be many more issues that I’ve just not thought of yet.

All in all this seems like one of those sounds simple on paper but isn’t when you look at it rules, like True Line of Sight. TLOS is a great idea in principle – if you can physically see the target then you can see it! But it rapidly falls apart when you start looking at the actual mechanics of it and looking at problems like multibasing, modelling for advantage, representative rather than realistic terrain (blank forest bases with 3 trees on them rather than a shedload of trees with enough foliage to block LOS).

There is an alternative potential solution which we banded about a few times before 2nd edition but never got around to testing or implementing it: Overrun.

At the moment this is just a weakness of Individuals where a unit can overrun after routing an individual and make additional melee attacks against another enemy unit it contacts. What if we brought it out of the Individual rules and made it a more universal rule? Not for all units, since that would be daft, and we’d have to put limits on the number of times that it could be done.

In the Clash of Kings book, we introduce a Unit Strength rating for scenario scoring (so Dominate becomes the total unit strength entirely within 12” of the middle of the table for example):

We also want to add clearer rules in 3rd edition for non-movement phase charges, such as Surge and the current Individuals overrunning rules. These would discuss how you align in these situations, how to split frontage (if applicable) etc. For the purpose of this I’ll call them Out Of Phase Charges (but I’m sure we’ll come up with a better name whenever we get around to 3rd ed).

In combination with this, I could see something like this working:

When a unit is overrunning, if they choose to advance D6” for their regroup move and make contact with another enemy unit then it is treated as another charge and it can make melee attacks against the new unit. The charging unit aligns as per Out Of Phase Charges. This subsequent charge is Hindered.

The maximum number of times that a unit may make melee attacks in the same phase is equal to its Unit Strength. E.g. For a Regiment with a Unit Strength of 2, it could make its melee attacks against its initial charge target, make one overrun charge but then may not overrun any more that turn.

This may need a lot of work since it may be too powerful on steamroller units (I can imagine Ogre Legions carving a very messy path through an enemy force for example), however this would mean that those pesky small enemy units clinging on with their last breath could be broken and then your unit could overrun into another enemy unit. While you wouldn’t be able to split your attacks against multiple enemy units, the effect would be very similar. If you manage to rout an enemy with a much larger unit then your excessive force wouldn’t necessarily go to waste that turn.

It is up for debate whenever we get to 3rd edition (still a few years away yet kiddos!) and it may have unintended consequences, but it certainly seems on paper to be far less troublesome than allowing split charging.