This weekend I had a couple of tactical situations that I thought would make for an interesting write-up.

I deliberately gave my opponent a rear charge on a regiment of Hellequins with their Abyssal Dwarf dragon.

I had been on the back foot all game with all of the action taking place on my right hand flank and I was getting crushed. I lost 2245 points out of 2600 points that game and killed about 700 in response (half of that came from a timely double 1).

Early on I knew that I could not hold that flank and that my only hope was to hold objectives with my remaining forces (a regiment of tortured souls and a horde of Lower Abyssals). I grabbed 3 of the 5 loot tokens with those units and then spent the rest of the game backing them off. On the other flank I was feeding him units to tie him up and keep him busy as long as possible.

My right hand flank had almost entirely collapsed by turn 4. I was down to a regiment of Hellequins and Ba’El fighting on, with everything else routed.

At the end of his fourth turn, he had 3 big hitters freed up from combats – an Abyssal Dwarf dragon, Ba’su’su and Brakki Barka. They needed a full turn to fly/run over to a position where they could charge my Lower Abyssals and Tortured Souls. That would give them at least one turn to kill a unit, then a 7th to kill the other and claim all the objectives. Quite do-able with average dice rolls.

So, at the end of my turn 4, I turned my Hellequins after a combat to face down the rest of his army. Doing this “accidentally” exposed the rear of my Hellequins to his dragon. A very juicy target, worth a lot of kill points. 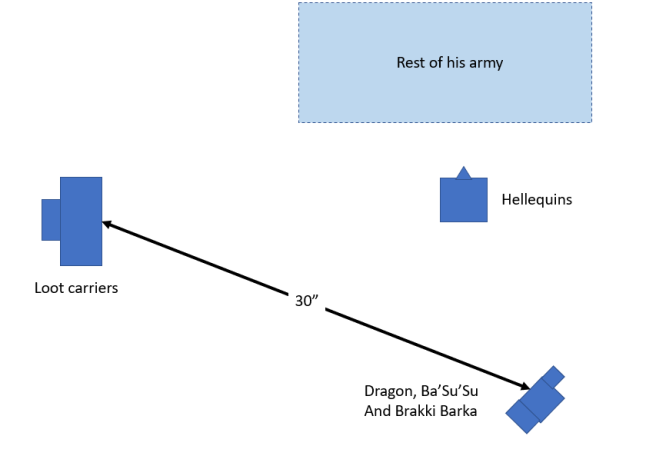 He took the bait.

This meant that his dragon moved north (from my perspective), not west towards where my objective holding units were. He ended up rolling a double-1 on the Hellequins as well, and they smacked the dragon down in the counter charge.

Even without foresight of the double-1, it was the wrong move to make. Even if he’d killed the Hellequins (and it was always going to come down to the double 1), he had wasted a turn of manoeuvring into position for a charge on my objective holders.

He shouldn’t have done it – he lost sight of the objectives. Yes, my Hellequins staying alive could have meant a lot more dead units (there was nothing else that could truly threaten them on that flank, except for 3 breath attack weapon teams), but without taking at least one of the loot counter I was holding there was no way he could mathematically win.

He only had two to three turns left and had two units to destroy and it was going to take him a turn just to get into a charge position. By baiting him with an “accidental” rear charge, I was able to make sure that he wasted a turn.

Yes, I used my Hellequins as chaff. It won me the game though.

Pivoting past an individual

This was the situation:

Dan had charged my Hellequins with a last-ditch gamble combo of a regiment of (hindered) Horse Raiders in the front and a troop of Horse Raiders in the flank. He moved his Ice Queen to try and block my Despoilers from charging in too. There was a small gap between the Despoilers and Hellequins but not enough for the Ice Queen to get in between and still respect the 1” gap.

My Hellequins charged the regiment of Horse Raiders, opening up a bigger gap between my two units.

This left a sizeable gap for my Despoilers to declare a  charge against the troop of horse raiders:

I find that many people grossly over-estimate how much an Individual’s base can block pivots. Even with a larger than normal width compared to depth, an individual wouldn’t block this pivot until it started to get halfway down the unit – definitely not on the corner like in our game. 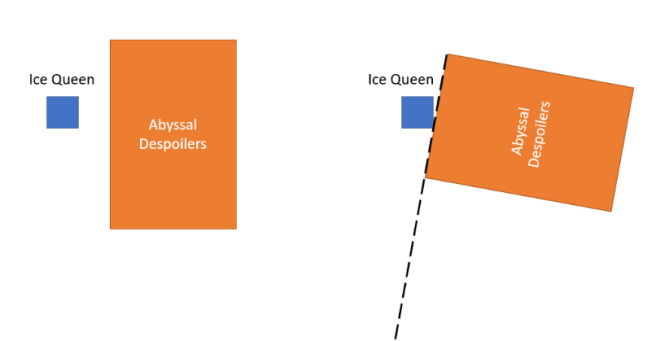 If my unit had a smaller width vs depth then the pivot that can be pulled off even if the Individual is centred on the enemy unit is even more surprising:

The problem with blocking with individuals is that their small base means that units are often still able to pivot past them for a charge against a unit to the side.

I’ve also caught people out with this in the past where they’ve used a 50mm base to try and block a unit: 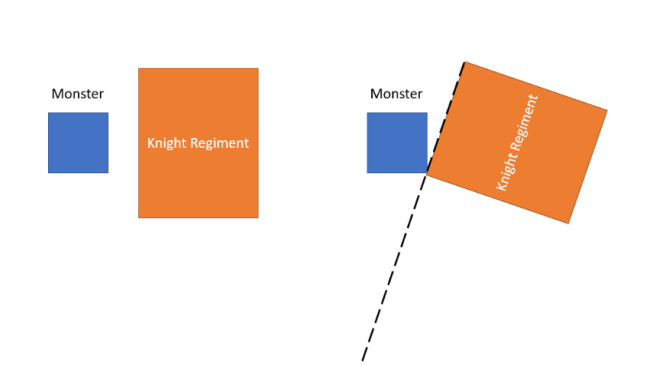 In this instance though I assumed that Dan saw what I saw and made was looked to me was an obvious move. Lesson learned not to assume!

4 thoughts on “Tactial situations at Sword of Summers”